Toronto, Ontario, January 25th, 2021 – Ubique Minerals Limited (“Ubique”) (CSE:UBQ) has received assay results for the balance of the drill holes completed on its Daniel’s Harbour zinc project. All nine were drilled on Mineral Licenses under option from Ophir Gold Corp.(formerly Minkap Resources). Holes UM-38 – 43 tested a new, very shallow target, the 2160 Zone, with the highest grade hole intersecting a remarkable 34.6% zinc over 0.75 metres. Holes UM-44 – 46 were drilled in the Nose Zone and extended the strike length of this zone by 75 metres to the northeast which gives it a total defined length of more than 250 metres. MinKap Resources Inc., with whom Ubique has the option agreement, has changed its name to Ophir Gold Corp.

The six holes drilled to locate the 2160 Zone were successful in locating stratabound zinc mineralization dipping westerly at 15° at extremely shallow depths, the shallowest intercept starting at 4 metres vertically below surface and the deepest intercept at 11 metres depth. The attached plan shows the locations of the zones drilled and their position relative to former mine workings and mine access. The 2160 Zone drilling was along a single section line as shown below.

The Nose Zone drilling results are shown in the table below and in the longitudinal section attached.  Overall intersections are 4 – 6 metres long with alternating higher and lower grade zinc sections ranging up to 24% zinc. All but one of the newly drilled holes were vertical except for UM-46 which was drilled at -75° to the northeast which means that it cut the stratabound zinc horizon at close to a true width.

Gerald Harper, CEO, said “we are very pleased with the results from the drilling, particularly in the Nose Zone, as the zone now is demonstrated to have more than 250 metres of strike and is open at both ends, making it a priority for additional drilling. It parallels one of the largest ore zones mined in the former mine and is also close to the decline ramp access to that ore zone”. 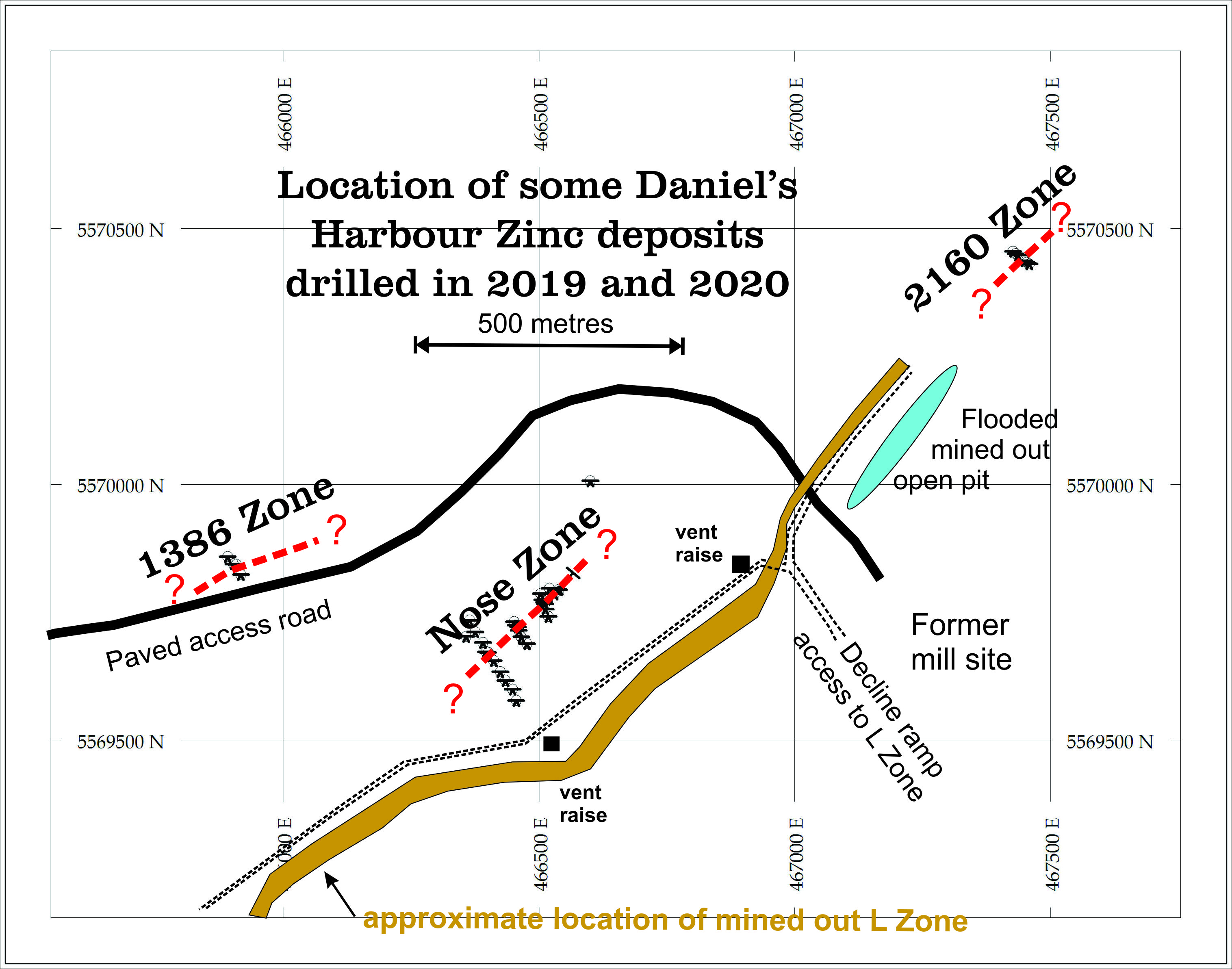 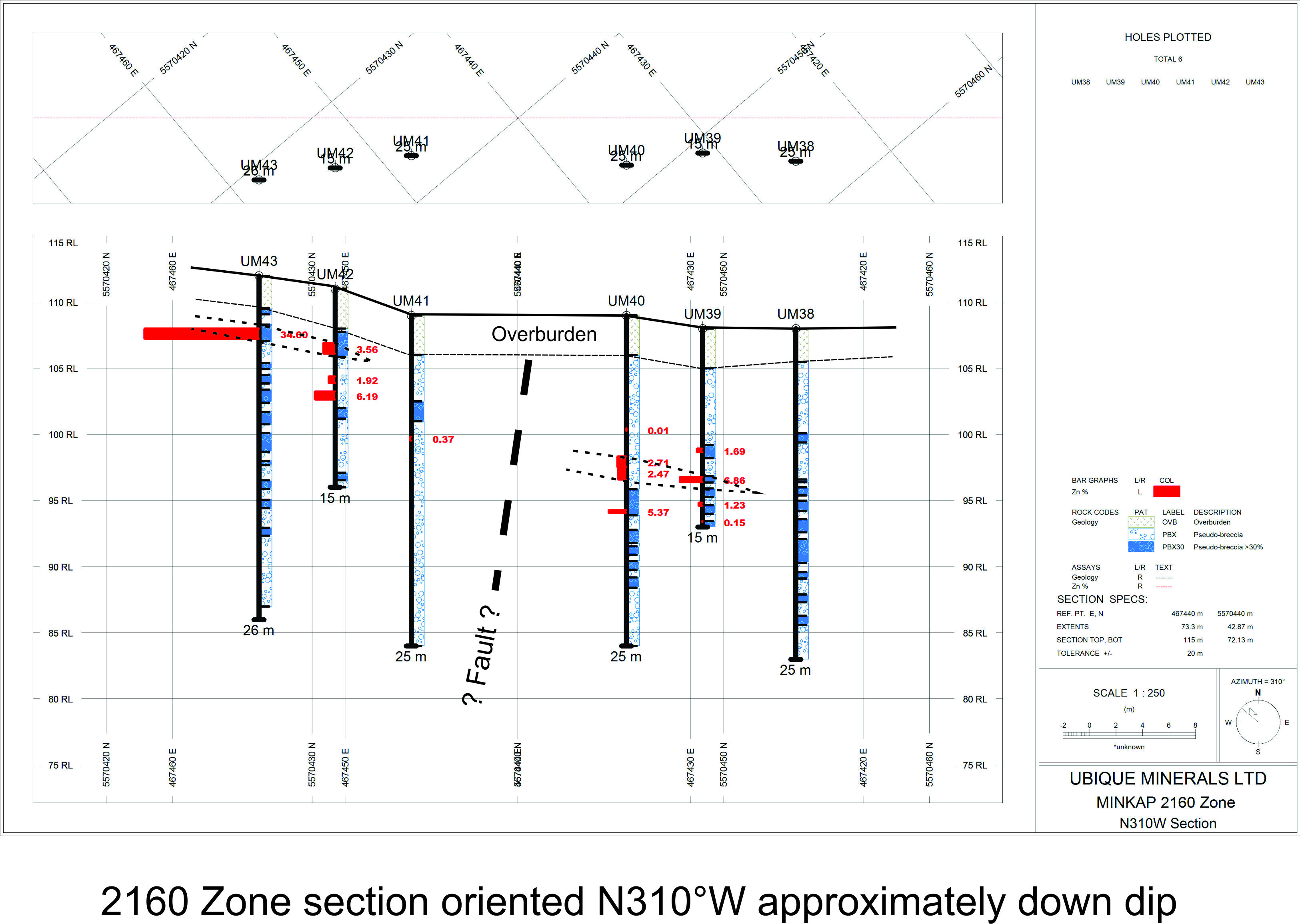 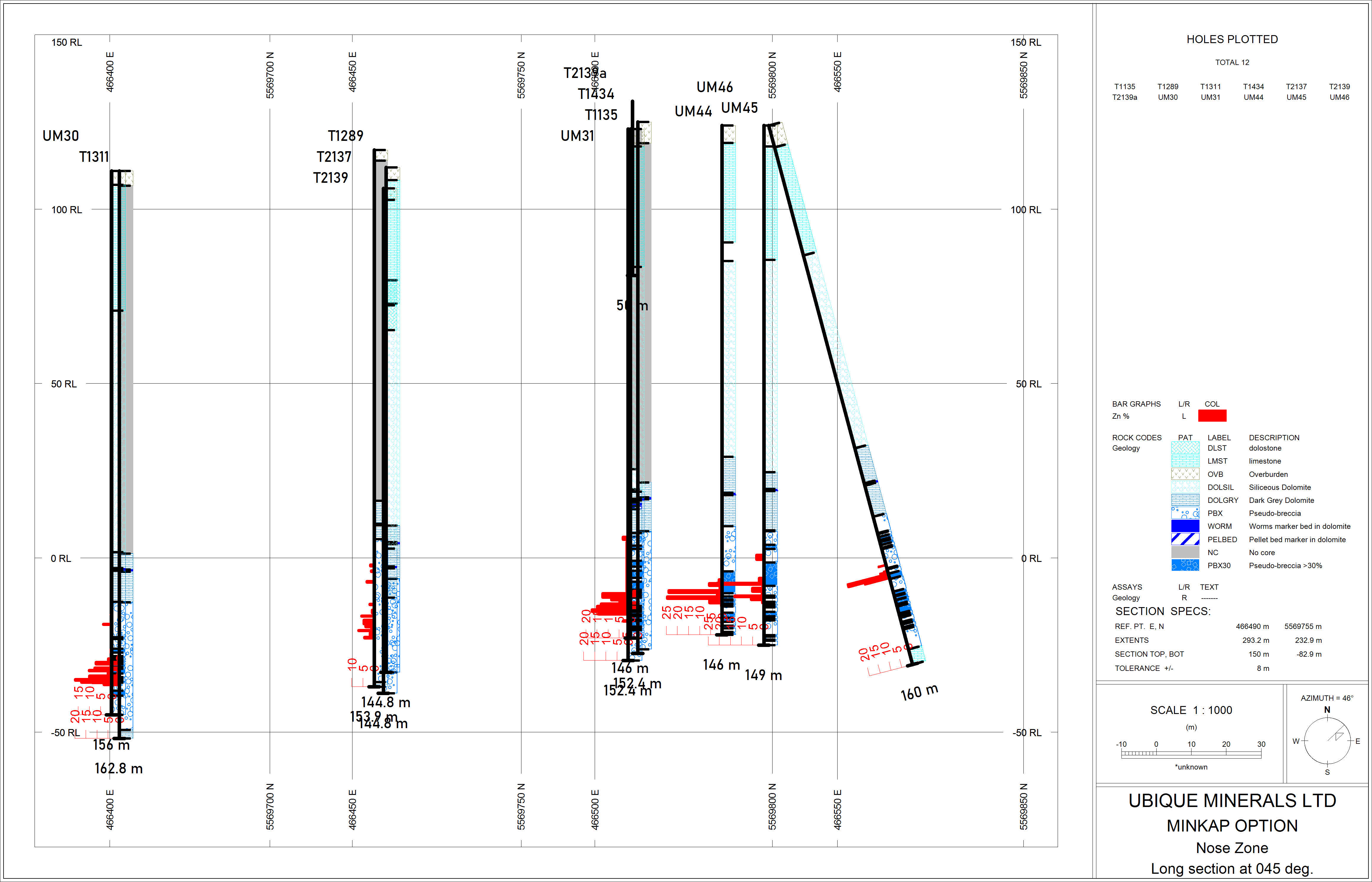 All assays were undertaken by Eastern Analytical Ltd of Springdale, Newfoundland and Labrador. Eastern Analytical is I.S.O. 17025 Accredited in Fire Assay Au, as well as in multi-acid ore grade assays in Cu, Pb, Zn, Ag, Fe and Co. Standards and blanks were inserted by the company and the laboratory and all reported within acceptable limits. For all the holes except UM-46, the intervals assayed in the drill holes are estimated to be 95 – 98% of true widths of the mineralized zone assuming a dip of the zone of 10 – 15°. Holes UM-38 to UM-45 were all drilled vertically and UM-46 was drilled with a collar dip of -75° towards an azimuth of True North 40° East. The intervals in UM-46 are estimated to be 80 – 85% of true width of the mineralized zone.

Ubique’s exploration programs in 2017 and 2018 received financial support from the Government of Newfoundland and Labrador’s Junior Exploration Assistance Programs and the Company has applied for financial assistance from the program for 2020 as well.

The above illustrations are also available on the Ubique website at www.ubiqueminerals.com