Toronto, Ontario, 5th August, 2021 – Ubique Minerals Limited ("Ubique")(CSE:UBQ) is pleased to announce that it has entered into an exclusive, non-binding Memorandum of Understanding (“MoU”) to earn-in up-to 80% of Alumina Ventures Ltd (“AVL”) shares. AVL is 100% owner of the Port Loko Bauxite deposit and partially developed mine in Sierra Leone.

Alumina Ventures Ltd is a Sierra Leone registered private company that holds large scale mining licence ML10-2021 for the historic Port Loko Bauxite project. The Port Loko Bauxite project was developed by SierraMin towards production from 2016 to the end of 2020 and was acquired by AVL in May 2021. The mine had started its pilot plant phase but operations were halted in late 2020 COVID related. AVL acquired all of SierraMin assets in April 2021.

The board of directors of Ubique after undertaking initial due diligence have determined to move into final discussions and legal agreement with AVL towards the completion of an agreement as follows:

The company and AVL signed a MoU on the 8th July 2021 with the following conditions.

The company will use the next 60 days to finalise legal agreements and due diligence on the project.

Funding of the project

The company is in advanced discussion with investors to fund the earn-in/acquisition by a way of a convertible loan facility but does not preclude the use of alternative sources of funding in addition.

Vilhjalmur Thor Vilhjalmsson CEO commented “the company is using its resources to identify distressed projects and opportunities within the mining sector. The Port Loko project is a unique opportunity to get into near term production and the team looks forward to the challenges ahead. With a strong backup from associated partners Greenbank Capital and JV Capital that participated in our current private placement the company is well funded and with strong partners the project could be in operation within a reasonably short period of time”

Significant exploration of the Port Loko area occurred between 1972 and 1976. During that period a subsidiary of Alusuisse, Sierra Ore and Metal Company (“SIEROMCO”), undertook systematic exploration of the northern extension of the bauxite belt in the Port Loko area. SIEROMCO, had mined bauxite in Sierra Leone since 1965. The majority of the existing database was generated during this time. The SIEROMCO work concluded with feasibility studies, which indicated a mineable deposit with ‘reserves’ of over 100 Mt, of which 77.3 Mt of bauxite has been ‘proved’. This resource estimate is not considered to be compliant with International Reporting Codes.

Work on the deposit resumed between 1992 and 1997 and was conducted by Jupiter Export Import Ltd (“Jupiter”). The work involved the re-excavation and re-sampling of several SIEROMCO’s pits in order to confirm the historical data. Jupiter’s work was preliminary in nature and did not add significantly to the projects’ exploration activities. Jupiter’s programme appears to have been a summary of previous SIEROMCO work, including redrawing of maps, although these do not appear to provide any additional information.

Many of the raw exploration records collected/collated prior to 1996 by both SIEROMCO and Jupiter were destroyed during the civil war in Sierra Leone. In 1997, Canadian mining company Global Explorations Ltd commissioned Watts, Griffis and McOuat Limited (“WGM”) of Toronto, Canada to prepare a due diligence report (“WGM report”) on the Jupiter work in association with a proposed purchase of the concession from Jupiter. This work was conducted by Hains Technology Associates (“Hains”) under subcontract to WGM and included assessment of the rail and port facilities. Historical scoping study level estimates (±50% accuracy) for capital and operating costs of development and operation of the mine where described. These estimates included rehabilitation and operation of the rail line and port facilities and a financial analysis was conducted based on saleable tonnage of 1.8 Mtpa at an average price of USD 18.00/t. Assuming a capital cost of USD 40.0M, the operation was evaluated as profitable at the time and under the set of assumptions provided. The analysis also indicated the Project was highly sensitive to variations in sales price, capital costs and operating costs.

Between 2002 and 2008, Moydow Mines International Inc. (TSX and AIM listed) and Gondwana (Investments) S.A. completed over 400 auger drillholes and initiated work on a ‘Bankable Feasibility Study’ in 2006. In Moydow Mines Annual Information Form, filed on SEDAR on March 31, 2009 for the year to December 31, 2008 they state:

“Sieromco’s 1970s exploration led to the definition of 104 million tons of ore of medium grade as shown:

This is considered a historic resource and should not be relied on by the reader.

Subsequently another private company, Sierra Leone Exploration and Mining Company (“SLEMCO”) obtained the licence for Port Loko in 2009 after it was not renewed by Moydow and Gondwana. Between 2009 and 2014, SLEMCO undertook limited verification work before the exploration licences were transferred to another private company, SierraMin. In 2016 SierraMin was issued a large scale mining license and in 2017 contracted with SRK Consulting (UK) Ltd to complete a JORC compliant resource of inferred and indicated resources which was completed in 2017. The report is not yet public. SRK recommended additional work to upgrade the resource and metallurgical test work which was also undertaken, and in 2019 a pilot plant was built onsite of which the company has not received any metallurgical or operational results. As part of its due diligence Ubique will determine to what extent SRK can assist in the furtherance of development of the property. 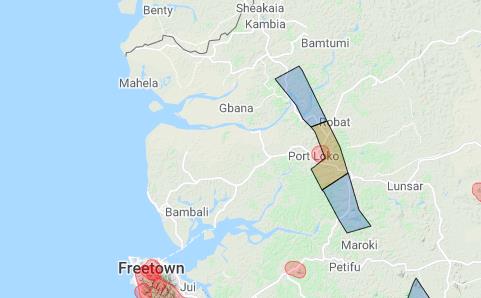 Figure 1 the yellow colour represents the mining license ML-10 2021 total 129.3 km2 the blue respresents 247,7 km2 exploration license held by Sierramin and are part of AVL purchase and are requested to be transferred to AVL.

Ubique Minerals Limited is a zinc exploration company listed on the CSE (CSE:UBQ) focused on exploration of its Daniel’s Harbour zinc property in Newfoundland. It was funded for its first two years by private equity including that from Greenbank Capital Inc (CSE:GBC and OTCMKTS:GRNBF and FRA:2TL).  Ubique became a publicly listed company in September 2018.  Ubique has an experienced management group with a record of multiple discoveries of deposits worldwide, and owns an extensive and exclusive database of historic exploration results from the Daniel’s Harbour area. For more information on Ubique please contact Vilhjalmur Thor Vilhjalmsson CEO +354 8697296 or by email vilhjalmur@jvcapital.co.uk or see www.ubiqueminerals.com

Dr. Gerald Harper, P.Geo.(NL), is the qualified person as defined by NI 43-101 responsible for the technical data presented herein and has reviewed and approved this release.